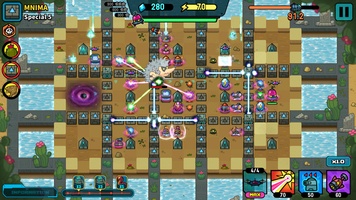 Advertisement
Broken Universe: Tower Defense is a strategy game that puts you in charge of building your own barricades to protect your base from being attacked by endless waves of monsters. Defending your base from these enemy invasions won't be easy - you'll have to build strong protective barriers to help you overcome each attack.

In Broken Universe: Tower Defense, you'll find attractive graphics that will allow you to place the elements in each area of the settings. These environments are segmented into squares that you'll be able to occupy with different items that will make up your barricades. As you play and advance in the game, you'll build genuine fortresses that will be increasingly difficult for enemies to penetrate.

Although during the first confrontations in Broken Universe: Tower Defense you won't have many resources, you'll gradually have the option to improve the conditions of your base. From the main menu you'll be given the possibility to unlock a multitude of turrets, massive blocks and heroes that will allow you to face the most powerful monsters. In fact, as you gain experience, you'll be attacked by more and more fierce enemies that you'll need to defeat.

Broken Universe: Tower Defense introduces you to a complex environment with a combination of different characteristics. By forming your own barricades, you'll be able to stop the rival attacks to protect the base you defend from any attack. All this makes this game a unique "tower defense" that will make it hard to take your eyes off your screen for even a second.
Reviewed by Carlos Martínez Translated by Sarah Odebralski
Advertisement

There are opinions about Broken Universe: Tower Defense yet. Be the first! Comment

TENKYU
Guide the ball into the tiny hole

Vampire's Fall: Origins
Will you be the hero that the world needs?

Car Parking Multiplayer
Drive around an extensive map for a realistic parking experience
Clash of Clans
Crush enemies and lead your clan to glory
Mobile Legends
An excellent, but shameless, League of Legends clone
Scary Teacher 3D
Escape the terrifying teacher!
Bus Simulator Indonesia
Drive a bus through Indonesia with this simulator
Clash Royale
Clash of Clans characters face off in epic duels
Vegas Crime Simulator
Try not to get caught breaking the law!
Clash Mini
Play with tiny Clash of Clans characters

Cookie Crunch
Make More!
Work, work, work!
ProDnD
Premiere Play
Follow the best Brazillian soccer on your smartphone or tablet
FanDuel
The fantasy sports league everyone's been waiting for
FishBrain
A platform for anyone who loves to fish
Weed Firm 2
It's back: the RPG where growing weed is a story
Bleach Brave Souls
Official video game for Bleach the anime